Binance is one of the largest cryptocurrency exchanges. There are threats from bad actors, who can affect the operation of digital exchanges that also affects users. When an exchange gets hacked, holders of coins who have left funds on the exchange usually have no way of getting their digital assets back. This is why a form of mitigation to be able to recover funds is becoming important. The Mt. Gox hack wiped out that digital exchange of 850,000 BTC (Bitcoin). To this date there has been no formal settlement with former coin holders.

Binance provides its own security measure to address this problem. It is called the SAFU (Security Asset Fund for Users). It is an emergency insurance fund announced back in July 3, 2018.

“To protect the future interests of all users, Binance will create a Secure Asset Fund for Users (SAFU). Starting from 2018/07/14, we will allocate 10% of all trading fees received into SAFU to offer protection to our users and their funds in extreme cases. This fund will be stored in a separate cold wallet.”

The story of SAFU goes back to a time Binance CEO Changpeng “CZ” Zhao tweeted “funds are safe”. It became a regular message from CZ to assure exchange users on their status. Later a content creator named “Bizonacci” uploaded a video called “Funds Are Safu” on YouTube. It went viral and the term “Safu” instead of safe has stuck ever since.

This insurance fund collects a percentage of fees from transactions on the exchange. This would be used in the event of a serious breach that compromised the funds stored by the system. It is also stored in secure hard wallets away from online access to hackers. The fund is released in the event of an emergency only, so it continues to accumulate unless otherwise.

These are good measures to provide customers if you are a digital exchange. However, if you are the customer you might consider not storing your coins or tokens on an exchange because of the risk. Since exchanges do not guarantee the safety of your funds, if anything should happen like a software glitch or hack, your funds should they get stolen cannot be fully reimbursed by exchanges. Depending on jurisdiction, you can only pursue a lawsuit if there is any responsibility on the part of the digital exchange to reimburse you based on the policy agreement. Most of the time there is no obligation by the exchange, so storing funds in their custodial wallet is at your own risk.

The best solution is to have your own SAFU to store your funds. That means a hardware wallet that is offline in your own possession. This also gives you control of your own private key, something that digital exchanges don’t provide. Using online wallets (e.g. Exodus, Metamask, MEW, etc.) are also options, but since they are online they are still at risk from being attacked. Whichever wallet a user chooses, what is important is to keep the private key and seed phrase secure. 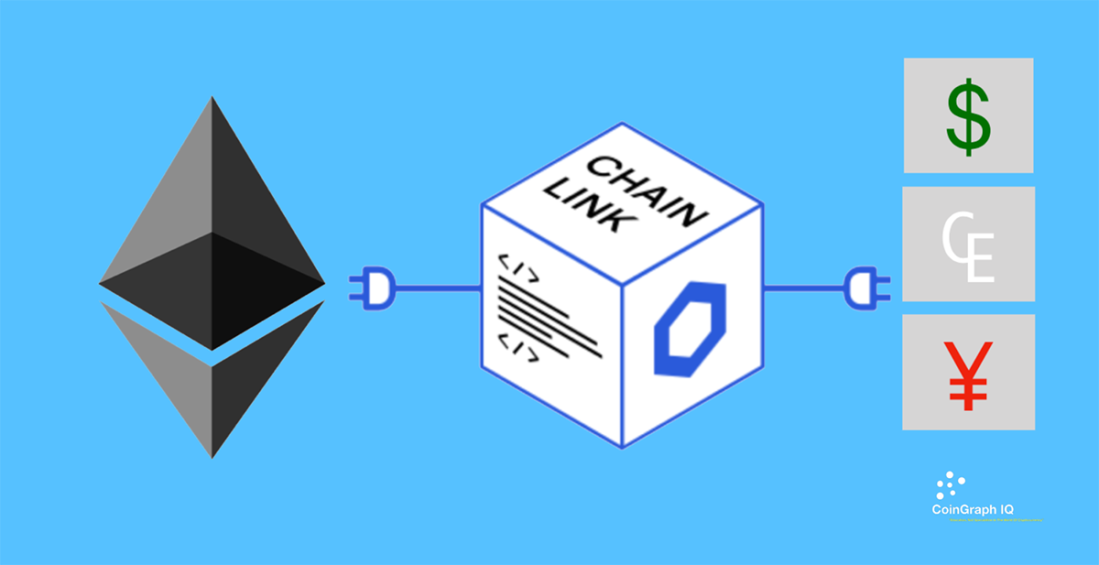 Ethereum is surging as DeFi is bringing in more liquidity into the decentralized platform. A vital part of this push includes Chainlink, a decentralized oracle network. Chainlink provides a solution for providing information to smart contracts, many of which run on the Ethereum platform. Blockchains are evolving to third and fourth generation networks that introduce new features that extend the capabilities of smart contracts. It is significant to the Ethereum blockchain when it comes to use case.

Chainlink provides an API for connecting smart contracts to real world data. This information can be processed form databases which feed the data to smart contracts in real time. What separates Chainlink from other oracles is its decentralized BFT (Byzantine Fault Tolerant) network architecture which is not under the control of any entity or organization. This prevents bias, data tampering, manipulation and single points of failure. Downtime can be costly when data is not received in time. This can affect business decisions like when to sell stocks or coins.

One of the main applications for Chainlink is connecting smart contracts to real time price feeds. By design, Chainlink was developed to bring off-chain data sources to on-chain smart contracts. The previous problem with smart contracts is they could not get data on their own. Chainlink provides a type of middleware to connect external data to the smart contract to execute on any blockchain.

To ensure that nodes on the Chainlink network are feeding accurate data to smart contracts, a token is used called LINK. It is an incentive to the oracles who provide data and help secure the network. Bad actors are removed from the system while those who are honest receive the incentives. There are consequences for dishonest nodes who try to tamper with the data. It is a type of reputation system so bad actors will be discouraged from malicious intents on the blockchain. This includes nodes that neglect providing data, falsifying data and attacking other nodes among other things. This provides an open market that is merit-based to provide reliable and trustworthy data.

Prior to Chainlink, oracles could not directly feed data to smart contracts in real time. The data from oracles can be coded by developers, but they could not do it automatically until the Chainlink API came along. A smart contract can get external data feeds from various data sources via Chainlink’s nodes that handle data requests. They also return the results back to the smart contract to fulfill the request.

The importance of Chainlink is the way it provides real world data. For practical application use cases, oracles like Chainlink can provide data as they occur and not from a previous time. Smart contracts that are able to get data in real time to process transactions are more accurate and reliable. This can improve systems that rely on constantly changing data like on monetary exchanges. This means a trader will get the actual value of their trade as it is happening in the market.

The potential is huge for Ethereum. It provides an actual service that has a use case to benefit users. It is also decentralized so there should be no point of failure or downtime. These oracles perform non-stop even if one node is down since there will be others to take its place. This can help extend smart contract capabilities on Ethereum to become truly reliable for business and finance.

Scalability is one of the main criticisms against Bitcoin (BTC), since the network is not capable of more than 7 TPS (Transactions Per Second). This is due to the “Scalability Trilemma” of blockchains, in which there is a tradeoff of scalability with security and decentralization. You cannot have all three things at once so it requires a balance of resources. If you value more decentralization, you will get more security as well but that will be at the expense of scalability. The blockchain cannot scale if there are too many nodes on the network. When compared to the VISA and Mastercard network, Bitcoin is not on the same level when processing transactions. The VISA network can process over 1,700 TPS or close to 150 million transations per day. In reality though, it doesn’t always reach these values but it gives some idea of the scale VISA is capable of.

While the developer community looks to the fundamentals of Bitcoin as its strength, others view ways to preserve the core architecture while introducing new features to enhance it. One way to improve scaling is through a Layer 2 solution called the Lightning Network (LN). This protocol moves the computational process from the blockchain main network to an off-chain layer. This puts less work on the nodes while using an off-chain layer as the solution to process direct peer-to-peer transactions using payment channels. The blockchain will then be used for settling the transaction and recording it. These can also be implemented as sidechains, which still have a Merkle Root for provability that they are a part of the blockchain. In theory the LN can process up to 1 million TPS and support other cryptocurrency (e.g. Litecoin).

One of the main talking points of the Lighting Network is reducing transaction fees. This means instant payments that only require a fraction as fees. The idea is to enable micropayments using BTC and make it much easier to pay for items like a cup of coffee. Prior to that, paying for coffee with BTC was impossible. Merchants do not accept BTC and the transaction fees were quite expensive. It made more sense to use BTC to move millions of dollars of currency than to transact $5.00 for a cup of coffee. Developers also promote the idea of using the Lightning Network for Atomic Swaps, which allow large amounts of BTC to be exchanged for other currency or cryptocurrency.

The LN has been in development since 2016. One of the requirements needed to support it was the activation of SegWit BIP 141 UASF. SegWit was activated on August 24, 2017 after the Bitcoin community agreed on BIP 91 (signals the support to activate BIP 141). While it has been steadily improving for production use, it is not without critics. The Bitcoin Cash community hard forked from Bitcoin because one of the reasons was that they did not support SegWit and the LN. The Bitcoin Cash supporters believe in larger block sizes and on-chain solutions as opposed to maintaining existing block size and off-chain solutions. Other critics have expressed concerns that the LN could become centralized with payment channels. Several channels could form one large channel and monopolize the network, in theory. Other views state that the channels could become like intermediaries, with the power to deny transactions and thus defeats the purpose of a decentralized system.

There are 3 possible problems with the LN (from Investopedia):

Since LN nodes have to be online at all times, if a hacker knows the LN node’s IP address and network, they can attempt to attack it. They can attack the node to disrupt its service or even to try to steal BTC. When a node goes off-line, by accident or intentionally, it can also affect transactions. A Fraudulent Channel Close can occur if a channel closes before the transaction completes and pocket the BTC. Network outages can also bring the LN system down if the payment channels are too centralized.

While the LN is aimed to increase adoption of BTC as a form of payment (i.e. medium of exchange), it may not be able to keep up with the network effect. Bitcoin Cash claims to have solved the problem with micropayments since it has a faster network than Bitcoin. In order for LN to be more successful it must be used for making BTC payments. It appears though that more people are willing to hold on to BTC as a store of value rather than for making payments.

Whether LN will become an integral part of Bitcoin, is still up for debate. It presents an excellent idea but it may already be outdated. More Bitcoin maximalists are really just looking at BTC as a digital asset counterpart to gold, so it is a new store of value. As BTC becomes more valuable, people will not likely spend it for micropayment transactions. This is where the altcoins fit the bill for that purpose. Instead BTC will be like digital gold, stored safely by HODlers in their hardware wallets. This creates a dilemma for the LN, but it can still work out for the best. BTC can be divided into smaller denominations or units called Satoshis. The LN can prove its value by providing a safe and easy way to make micropayments using Satoshis. Proving its value will make it a better proposition for developers to incorporate the LN in their applications, and that could onboard users for greater adoption.